I wrote the following post in 2012. The links in the old post have disappeared from the web, so I am reviving the post and adding links to new finds. 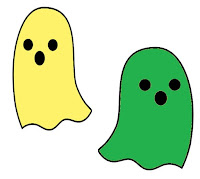 I was looking through my "fall folders" and found the story, The Chocolate Chip Ghost, written by my daughter when she was about eight years old. As there were no blogs at that time, I was happy to borrow ideas from my children's classwork. Her teacher read the story about the little ghosts who ate various foods, turned the color of the food, and then, hid throughout the house so no one would see their colors. Students wrote a similar story with their choice of foods and hiding places. 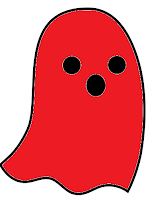 My students, who were just beginning to write, chose colors, matched food to the colors, and described hiding locations. We wrote the stories as a group. Toy foods and food pictures were used for visual supports and students colored little white ghosts to match food colors.

My daughter's story was written in 1995. Before writing the 2012 post, I searched the web and found two books titled The Chocolate Chip Ghost; both out of print - one written in 2004 and another in 2008. Seven years later, there are still no books but there are online and printable versions of this story. Use this story to teach spatial concepts (behind the door, in the bathtub, under the bed, etc.), sequencing, and appropriate responses to questions such as What happened next?, Why is he green?, or Where is he hiding?

The Chocolate Chip Ghost Story at felicyiamcClelland.com is adorable. Play the animated story on your computer or whiteboard then, retell the story using the free printables.

I like The Chocolate Chip Ghost Printable from Sunflower Storytime AND her suggestion to make a match game with the printables as well as the story puppets.

Find The Chocolate Chip Ghost printable story and suggestions for felt puppets at Colors and Kindergarten.

THE 5 LITTLE GHOSTS- HALLOWEEN STORY ON OBEDIENCE - free story and props from So Festive.

Storytime with Miss Tara and Friends and MRS. O'DANIELS both suggest gluing the colored ghosts on the back of the white ghosts.