Making a Shortcut to a Website on Your iPad

As many will be starting the coming school year with new or fairly new iPads, I thought that I would write a few posts about apps and iPads.

I have shortcuts to frequently used websites on my iPad. These shortcuts are easy to create. 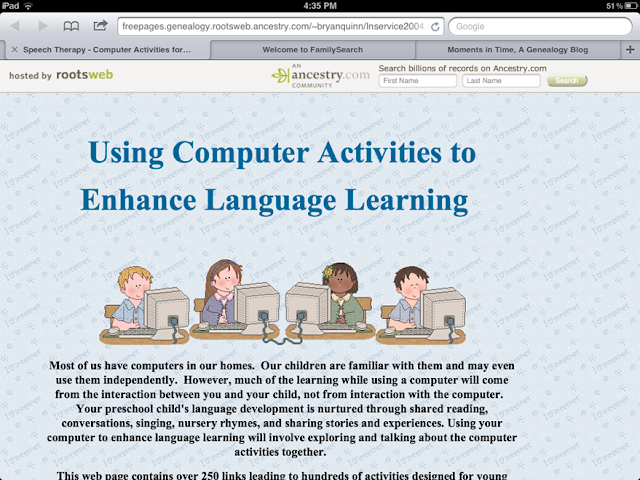 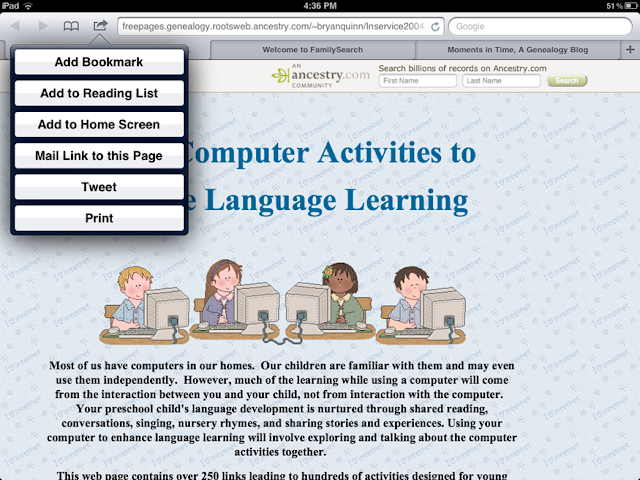 Name your shortcut/icon and tap Add. 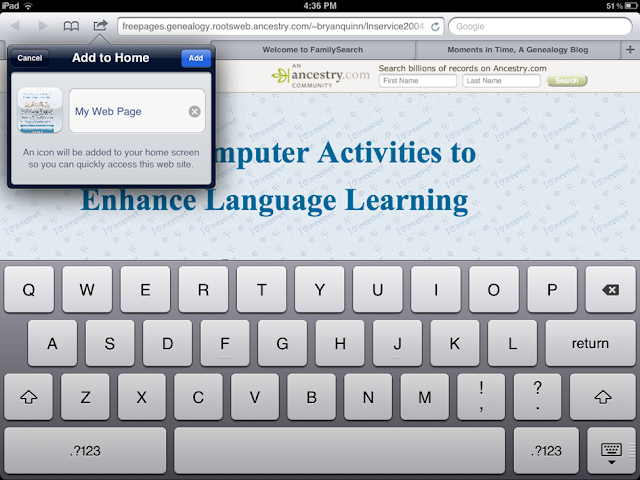 Done! The shortcut/icon will appear on your iPad screen.

Do You Close Your Apps?

I am on another vacation J and when trying to call home on my iPhone, my home button would only work intermittently.   I completely powered off and restarted the iPhone and tried a few fixes found in a Google search, but had no success.

One site suggested turning on Assistive Touch in Settings. You can then access your home button from the touch screen.  This worked; however, still irritated, I continued to look for a fix.  On impulse, I closed all of my open apps (or so I thought) and my home button worked perfectly – I haven’t had a problem since.

I decided to write about this to remind others to close their apps; however, when I started my web research, I found much conflicting information.

Many, many websites/ blogs will tell you to close the apps as they are running in the background and using up memory and battery power.

Other bloggers and “experts” at the Apple Support Communities state that those apps in the multitasking bar are those that have been recently used, but are not running in the background.

The iPad User Guide for iOS5 states that “Multitasking allows certain types of apps to run in the background, so that you can quickly switch between the apps you’re using. To view the most recently used apps:  Double-click the Home button. The most recently used apps appear in the multitasking bar at the bottom of the screen. Flick left to see more apps.”  The guide does tell you how to close an app if needed, but makes no mention closing apps to save battery power or preserve memory.

Well, I am going to continue to close my apps as it was the perfect fix for my problem with the home button and I have also had to close apps to use Google’s Voice Search on my iPhone and iPad. I started making PowerPoint books for my students in 2004.  My son, a middle school student, was making a PowerPoint for a project; a boy on a skateboard.  It took 90+ slides for the skateboarder to complete his short journey on the skateboard.  My middle-schooler showed me how to make the slides and within a month, I had three PowerPoint books and received a grant to make books for my students and send them home on CDs.  During the next six years, I made over 100 PowerPoint books.  Some of my favorites were personalized with student’s pictures.  Most were introductions to classroom language lessons and others were sent home as printed mini-books.  With the advent of my school iPad, I’ve found another use for those old PowerPoints – ebooks.   Save the PowerPoints as pdfs to iBooks and your students can read the PowerPoint books on your iPad.

Here’s how to make your ebooks.


Here are three of my PowerPoint Books ready for downloading.  Save them as PowerPoints, convert them to Flip-Charts for your whiteboard activities, and/or save them each as a pdf to add to your iBooks.

This first link is to a blog, 1plus1plus1equals1.com. This home school educator makes wonderful Easy Readers which are ready to use pdf books that can be added to your iBooks (no need to convert).  Read her directions to load the books.

Several of the adapted books at the NYC Department of Education are PowerPoint books.

Pete’s PowerPoint Station  has many, many PowerPoints and free clipart, too!

Technology Integration Projects for Students has ABC books for the early childhood population.

At Setbc.org, the website of Special Education Technology in British Columbia, you will find endless resources. Browse the Free Books made with PowerPoint. 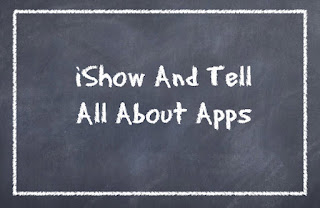 If you attended my session, iShow and Tell - All About Apps at Creating Connections to Shining Stars 2012 in Virginia Beach today (and even if you didn't), click here to see a list of apps for early childhood classrooms compiled by myself and the session participants.

Check tomorrow's post to find directions (and resources) for making PowerPoint books to add to iBooks.

My school system has supplied SLPs with Boardmaker software for many years and I don't know what I would do without it.  However, there are so many SLPs, teachers, and parents who struggle to provide visual supports without the luxury of having Boardmaker or other symbol making software at their fingertips.

Below are some resources for free visual supports.

The Center for Autism and Related Disabilities (CARD) at the University of Florida has a wonderful web page, Where to Begin With Visual Supports.  It is directed to parents, but would also be a good resource for the teacher or SLP who has not previously used visual supports. Don't forget to look at the examples of visual supports and their use.

The Indiana Resource Center for Autism created the video Autism House: Visual Supports for the Home. Examples of numerous visual supports are demonstrated and many could be used at school as well.

Cindy's Autistic Support has MANY good visual support files made with Boardmaker, but saved to a pdf. Math vocabulary, opposites, classification, Wh questions, behavior and schedules, recipes, and Bingo words are some of the boards that you will find at this site.

There are many apps for augmentative communication. A few of the the free apps will let you add your own pictures and customize boards. However, for simple visual supports, I recommend Picture Card Maker to parents with iPads.  This easy to use app has a free version with options to use the visuals on the iPad or to print the visuals.  NOTE: As of March 2015, I could not find this app in the App Store. It is an iPad app and if it is in your "Purchased Apps" it loads and continues to work.

At Setbc.org go to PictureSET to find a collection of downloadable visual supports that can be used by students for both receptive and expressive communication in the classroom, at home, and in the community.

At Speaking of Speech.com you will find materials, ideas, and lessons submitted by SLPs and teachers. Many were made with Boardmaker and can be downloaded in a PDF format, which means that you will be able to print the activity, but will not be able to modify it. Activities at the Materials Exchange fall under categories such as articulation, therapy games, themes, middle/high school, fluency, literacy skills, and more.

At SEN Teachers' Free Printables page, you will find ready to print dice, labels, and photo cards for matching, sorting, or picture exchange.

PECS Pictures from Beyond Autism - This would be a great source for parents who don't have Boardmaker or other resources (scroll down towards the bottom of the page to see these).

PatrickEcker.org is a website for sharing graphics, pictures, and visual supports for children with disabilities. There is a great library of visuals on this site.

Links and content updated March 2015.
Posted by Diana at 8:45 AM No comments: 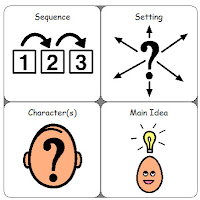 This is one of my most popular posts and this morning I noticed the links no longer working. I little checking and I found their new site. Many printables -no Boardmaker software needed. 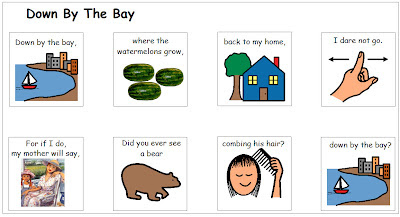 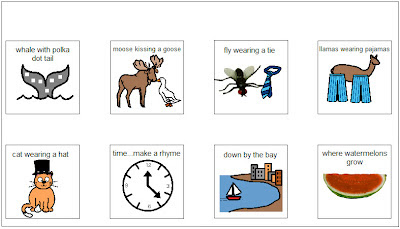 There are communication boards and /or overlays to use with a large variety of toys found in early childhood classrooms, as well as many learning activities.  The list below is a small representation of the items that you will find on this wonderful site. 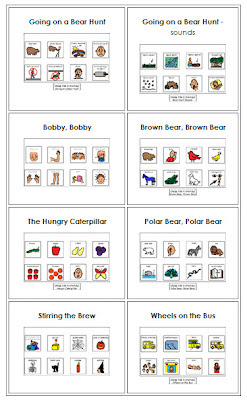 
The Picture Communication Symbols ©1981–2011 by Mayer-Johnson LLC. All Rights Reserved Worldwide. Used with permission.
Boardmaker® is a trademark of Mayer-Johnson LLC.
Posted by Diana at 8:06 PM No comments:

Earlier this week, I posted some of the activities that I used along with the book, Just a Mess by Mercer Mayer.  Below, are additional sports related links. 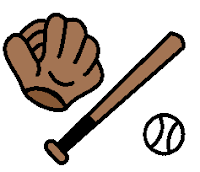 Some of our special education teachers are using the Unique Learning System’s free summer curriculum with their ESY students. There is a sports themed unit for preschool and the elementary through high school grade bands have sports/Olympics themed units.  There are many activities suitable for speech and language therapy. Download printable books and activities for vocabulary, phonemic awareness, sequencing, spatial concepts, and much more.

Finger plays about sports can be found at Bright Hub Education

At KidSparkz Preschool Resources download a collection of activity pages that coordinate with a baseball theme.


Make Benny Baseball and other Sports Buddies at DLTK-Kids.com

At BoardmakerShare.com  search for "sports" to find over 60 ready-made activities. Don't forget to check your version of Boardmaker as some activities only work with the new Boardmaker Studio.  Search for "baseball" to find more than 20 activities.  Check out the Jackie Robinson activity designed for elementary students

SesameStreet.org has many video clips and short activities about sports and the Olympics. Great to show and talk about!

Email ThisBlogThis!Share to TwitterShare to FacebookShare to Pinterest
Labels: Language 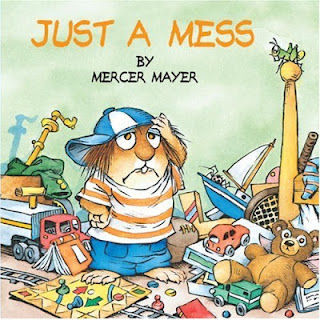 I loved to use books in therapy and often used Mercer Mayer’s Little Critter books with the early childhood population.  Just a Mess is one of my favorites.  Little Critter can’t find his baseball mitt and cleans his room to search for the mitt. This book gives a lot of opportunities for students to use spatial vocabulary.

We played with a variety of balls and used descriptive words to tell about the balls. I hid a baseball mitt and students took turns looking for the mitt; telling the location or where it could “not” be found.

On one page, Little Critter is putting away a large pile of books. My students learned the concepts heavy and light, while picking up different piles of books. 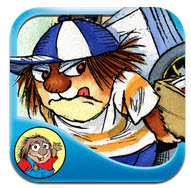 Visual supports and simple voice-output devices were used with every literature selection and I usually focused on a book for about three to four weeks. This gave the students time to learn the vocabulary and many could retell the story.

There's also an app for Just a Mess at Oceanhouse Media.

Here is a free download, Where is my Baseball Mitt, the PowerPoint book that I made to go along with the story. 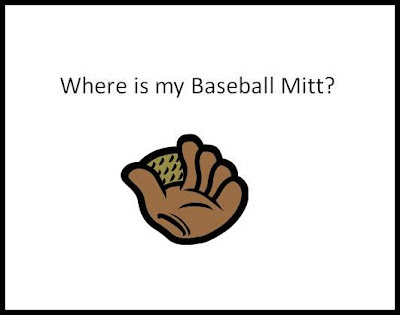 If you have Boardmaker, use this link to access the visual supports seen below at BoardmakerShare. 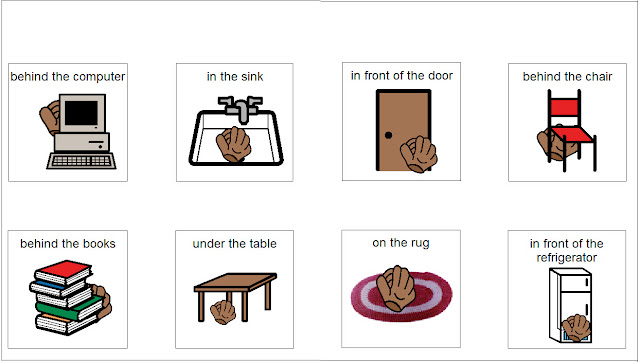 Check back later this week for Play Ball! Part II.


The Picture Communication Symbols ©1981–2011 by Mayer-Johnson LLC. All Rights Reserved Worldwide. Used with permission.
Boardmaker® is a trademark of Mayer-Johnson LLC.
Posted by Diana at 11:25 PM No comments:

Email ThisBlogThis!Share to TwitterShare to FacebookShare to Pinterest
Labels: iPads and Apps, Language

I just returned from my second vacation out west in a month's time. I visited eight states, at least six national parks, and three major cities.  I had fun, but am glad to be back at work. During this last trip, I was able to read my blogs (when I had service) and saw that many bloggers are posting activities for those of you who are serving ESY students or those of you who work throughout the year. Here are some of the posts that I found.

At Speech Time Fun you will find a variety of summer activities including summer themed activities targeting synonyms, wh-questions, and categories.